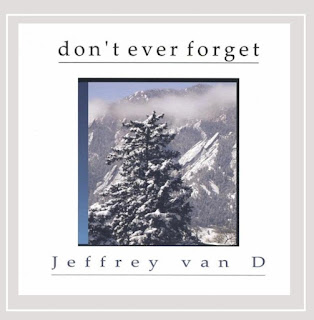 This post is being composed on the night of the 12th anniversary of my father's passing. It also happens to be the eve of Easter. For this post, I have chosen to take a deeper look at a song that is near and dear, in that it reflects on a year when a lot of change was happening in my world.

Final Farewell actually began to take shape late 2006, evolving with it's final form being solidified through 2007. The melody to this piece, once again, just came from nowhere. I don't know how it happens, but when some of these melodies arrive, it is almost like they are already written before I start playing them. I cannot say this is the way my songwriting always takes place, but as I sit here and look back, I cannot immediately recall a time or song where that wasn't the case. Final Farewell most definitely does fall into that category of arrival before I got there.

For lack of a better term, let's call it mid-life crisis. By the time I reached my late 20's, I was not thrilled to be getting older. My 30th birthday felt like more of a wake than a celebration. My youth had slipped through my fingers and there was no looking back.

Fast forward 14-15 years. I was now 45. My beautiful twin daughters were now teenagers. I was nearly 20 years into a career with spotty success at best. My passion and love for my chosen profession was waning. On the other hand, I did begin working toward my masters degree in music education. I also ran for, and was awarded, a seat on the state board of music educators - eventually achieving state chair years later.

During this same year, I put myself through a year of facial reconstruction. Within a years' time, I had my nose fixed from a pounding it took 25 years earlier - septoplasty. I also had surgery that involved taking bone from my jawline and moving to my upper front dental gum-line, as the bone holding my front false teeth had rotted away from a ski injury that knocked out my original front teeth 18 years previous. Once the bone began to take root, new teeth could eventually be installed. The previous year also saw me receiving lasik surgery so I could finally see without glasses.

Any of the above items listed separately would be construed as nothing much. However, coming at me in such quick succession, made riding this wave less surf and more Baywatch. I use this term only because I happened onto my own California Baywatch moment this same year when the Pacific undertow had pulled me quite off course, causing me to become face-to face with a Baywatch-type beach lifeguard who felt the need to rescue me.

Beneath all the undertow of this ocean wave called life, a song was brewing. By the time I had the time and ability to sit down and steal a private moment at a piano, a sobering melody rolled out. I played it for several weeks before finding a name for this melody.

As I began to reflect on how the melody made me feel, I realized a recurring sensation of melancholy. Personal change was arriving in the form of greater perceived responsibility replacing a carefree lifestyle with little consequence. Change was in the air, and it wasn't always painless. Loss was soon to follow, along with even more change.

As the song was taking final form, my father passed away. I had already recently lost the last of my grandparents. Soon after losing my father, I changed jobs. Within a couple months, I changed churches I was playing piano/organ for. Amidst all that, we moved from our house we had occupied for 10 years to another community. Change was most definitely in the air. Thus the title of the song.. Final Farewell.

For myself, the song resembled all I was saying goodbye to. Losing my father was chief among them. My first-ever public unveiling of Final Farewell came at my father's funeral when I played it for his wake. Saying goodbye to a man whose influence is with me everyday, who I fought with and against more than I ever should have, who I watched battle more health issues than one person deserves, who was deeply devoted to God along with his wife and family, who loved and lived his chosen profession like I never could, and yet, who I struggle to know and understand as I now reflect on his life 12 years beyond his passing.

Final Farewell was recorded at a location my father recommended to me, a new auditorium with complete studio for recording and a beautiful nine-foot Yamaha piano on the stage. This was a facility he was proud of as it was constructed his final year of teaching, so he got to finish his distinguished career on that stage. When showing off the facility to me, he said, "you should record your next cd here."

Oddly enough, conversations regarding that very topic began to take place at his funeral reception. Morbid sounding? Yes. But, his life revolved around music and the local people involved with it and I have no doubt he was guiding those conversations somehow.

In the end, Final Farewell is about celebrating the past and moving forward. I recorded it July 2009 in my hometown where I had grown up and graduated high school - Oskaloosa, Iowa. It is a song that seems appropriate for certain occasions, conjuring up many feelings when played. I hope you enjoy..

Wow, what a life story here Jeff, it's funny how life takes you to different directions and your feelings and love for your family, remains. And even more so when you lose someone like your father who you dearly loved and love, there's so many feelings that run through your heart and mind, and to me, that's when the great music you have created in the past and now shines above all obstacles. It is a savior of the soul, and I can feel your soul when I listen to your piano pieces, especially this beautiful Last Farewell. Be strong brother, you have a lot of life ahead of you. I am a better man for having known you for quite a few years now.