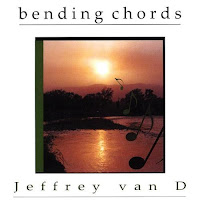 The audio files and graphics for my debut cd Ascend had just been sent off to the manufacturer. Excitement was in the air anticipating the official release of this first cd.

Wait time between the actual submission and shipment arrival is roughly about 3 weeks to a month. During the wait, release concerts were being planned, our new company JavaMusiK was undergoing it's genesis and pre-orders for cd's were being taken. Needless to say, we were anxious for the proverbial wheels to hit the ground.

In addition, during that time, a new song arrived.. We were still living in Swea City, a small town in northern Iowa. I had recently accepted a job offer to return to teaching in Colorado, so we knew we'd be packing up and moving in short order. First, there would be the release of Ascend with 2 cd release concerts - one in the community we had been living (Swea City, IA), and the other in the community where I was raised (Oskaloosa, IA).

The arrival of this new song came about as a theme that became an earworm in my mind. It wouldn't stop. During some down time, I sequestered myself on a Saturday afternoon to the sanctuary piano in the church we had been attending. Sitting alone at that piano, I began to play the theme I had been hearing for some time. It is the main verse theme that takes place immediately following the intro.

As I began to proceed during this session, the melodies seemed to just flow out. It was as if the song was already composed and I was just learning what comes next, section by section. Within the hour, the song was complete.

Unfortunately, the song didn't arrive in time to make it on the first cd release, Ascend. It would have to wait four years for the second release, Bending Chords. But, I did begin to play it at concerts which helped work the bugs out and evolve into a flow.

My first two concerts took place at churches in Swea City & Oskaloosa, IA. I was honored to have my father, who had taught previously in Swea City - and used to attend this church - and was presently a member at the church in Oskaloosa, introduce me at the beginning of both these shows. He was a great speaker, knew how to really get the audience excited to welcome me. This was a memorable way for me to kick off this whole venture that has continued to the present.

So, three and a half years passed. New songs got written, the move took place and life was moving forward. The year was 2002. The time seemed ripe to get into a studio and record a follow-up to Ascend. Having played live in a few places throughout the western Roaring Fork and Colorado River valleys in promotion of Ascend, one of the places I played was a B&N bookstore in Grand Junction. While I was packing up, upon finishing, someone came up who had been listening and spending some time on his cell phone (w/ a studio associate, I later learned). We talked and he shared he had a studio and production company in town. Would I be interested in visiting his studio? Absolutely! His name was John Malvey.

Two or three months later, we began our sessions and John was awesome to work with. So many great things I can say about working with him. When it came to Synyrgyze!, John's contributions were priceless. The guitar solo added so much punch to the song, along with the percussion and overall instrumentation arrangement. The whole album was like that - John had an ear and demeanor that helped take your music to the next level.

Finally, the second cd Bending Chords was recorded, graphics added and order placed. We sent my parents a copy of the pre-release. They listened. Next time I spoke with them, my father asked me to guess which song he liked best. I went through several selection titles before finally landing on Synyrgyze! He surprised me with this choice. One of the things he particularly liked about it was it was uptempo.

After releasing Ascend, it quickly became apparent that, while uplifting, the general tone of the cd was all mid to down-tempo. Nothing there that picked up the tempo any. A nice listen overall. But nothing that would wake you from your nap should you drift off. So, a conscious effort became part of the equation to pick things up a bit, at least part of the time, on the follow-up release. I don't remember Synyrgyze! being part of that conscious effort, but it definitely fit the bill. I was proud to finally have a song that could be considered more on the uptempo genre.

Any time I play Synyrgyze! in concert, I dedicate it to the memory of my father who, along with my mother, paid for and supported my piano lessons and growth as a musician. I miss him dearly.