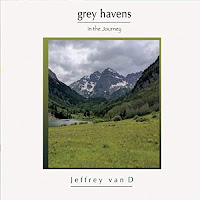 This is post number 5 in a weekly series dedicated to examining the background behind songs recorded, written and/or arranged by Jeff Van Devender, aka Jeffrey van D, for The JavaMusiK Label. Beginning in 1998, Jeff set out to record and lay down for posterity songs he had written over the course of the previous 17 years. Now, 22 years later, the stories are beginning to be told before they are forgotten. More behind the genesis of that idea can be found on Post #1.

Spirit of the Heartland was the first song to be written following the release of Don't Ever Forget in early fall 2009. As the sessions were wrapping up for Don't Ever Forget, a few small promotional gigs were played in and around the town where the recording had taken place - Oskaloosa, Iowa - where Jeff had spent his childhood. One of the gigs was a one-off at a popular coffeehouse in town, known as Smokey Row.

During this gig, music was primarily chosen from Jeff's first three cd's of material - Ascend, Bending Chords, and the newly recorded Don't Ever Forget - along with the occasional cover song. Several of the songs Jeff has written, recorded and played live possess a theme inspired by or named after something to do with mountains. Long story short, having lived most of his early life and grown up in the midwest, Jeff high-tailed it for the mountains once that became an option.

After naming off and playing a couple of those songs during the appearance, a rather observant and not too shy farmer who was nice enough to attend shouted out, "Where is your song about Iowa??" Insert long pause here.. No answer was available for him, honestly. None.

The seemingly random inquiry that day compelled some drawn-out thought and reflection. 30 songs recorded over the course of 12 years, 2 of the albums recorded in the midwest, one of them in Iowa and the best that could be offered as having relevance to that question was New World Symphony - Largo, on the Bending Chords album. The official story of New World Symphony indicates that Antonín Dvořák spent the summer of 1893 in Spillville, Iowa - bringing his newly composed New World Symphony with him. His summer in Iowa inspired much of his writing, including putting final touches on the New World and developing other projects as well, following a year directing the National Conservatory of Music in New York City.

Aside from New World Symphony - Largo, there was nothing musically to represent a part of Jeff and where he came from. Sure, pieces of music had been written in Iowa. But nothing was really inspired or written specifically about that life. Returning to Colorado, following the completion of recording, a theme began to emerge over time. As pianist for a couple churches, these themes often began to appear in Jeff's service playing. During church services, Jeff will often balance his service music between prepared selections and service music mood "improvisation" depending on where it fits in the service.

Over the next few weeks, and without putting much conscious thought into it, Spirit of the Heartland began to take shape. Occasionally, the theme would present itself during the church service improvs, then at home it got pieced together with a little more conscious attention being paid to the direction and form of the piece. The mood felt right. The name came next and it just seemed to fit hand in glove. The opening verse sections indicate a pastoral feel representing the calm and vast countryside. But the mid-section reveals a little more grit and drive, representing rugged determination, individualism and resolve of the American rural farmer/resident. This was the life embedded into the DNA and essence of where Jeff was raised. When being played, it just feels like home.

Composed fall of 2009, the song was too late to be included on Don't Ever Forget. It would have to wait another ten years before finally being recorded for Grey Havens - In the Journey. The recording sessions for Grey Havens took place at SkyDance Mountain Studio in Berthoud, CO. Having recorded a couple cd's over the pervious year, the studio director Brett Wilson brought an ease to the process that enhanced the creative spirit of the process.

Listening back now to songs like Spirit of the Heartland following the completion of the project, it feels very reassuring to have found the right studio and producer-director and make the 3 or 4 hour drive to Brett's studio for each session. Brett set the tone that helped make a song about "home" feel like home when it was being recorded. Here's hoping you can feel that rural spirit in Spirit of the Heartland.